You are here: Home / Our Projects / DESPRO– Decentralisation Support in Ukraine

SDC has entrusted Skat with the implementation of the decentralisation project (Phases I-IV) with the aim of contributing to the improvement of service provision in rural communities through the rehabilitation of community infrastructure, supporting service providers and strengthening of participatory decision-making processes and thus to the livelihoods of the rural population in Ukraine. Furthermore, developing, implementing and institutionalising of feasible mechanisms for local authorities to deliver efficient and effective public services to citizens in a decentralised manner as well as supporting the reform process on local self governance at national level.

Study Tours and Workshops conducted in the scope of the project

DESPRO is implemented by a team of 12 Ukrainian staff based in Kyiv, headed by a Senior Project Coordinator Oksana Garnets, steered and supported by Skat Project Manager Juerg Christen, and other technical experts from the Skat team in St.Gallen.

DESPRO was established by Skat in 2007 in response to request from the President of the Ukraine to the Swiss government for support of decentralising government to improve public services.

The political crisis of 2013-2014, annexation of Crimea and military conflict at the East Ukraine resulted in the difficult economic situation and a large number of Internally Displaced People. In this context, decentralisation reform is one of the country`s strategic priorities.

DESPRO being an active promoter of decentralisation reform, faced new challenges- and opportunities- at national, oblast and local levels when providing technical and advocacy support to the implementation of reform. The project has to main approaches- the first is supporting decentralisation reform as well as political and administrative processes at all levels; the second is strengthening the capacity of the local government to deliver new decentralised services in the areas of water supply, sanitation and solid waste management.

The overall goal of the first phase of the project was to initiate models of decentralized public services at rayon, village and municipal levels and their further integration and adoption at the regional level and national level.

Quality of and access to selected public services are improved with the participation of local communities and authorities who are institutionally strenghtened and jointly contribute to the local governance reform process at the national level.

The main focus of the ongoing Phase IV is on scaling up the existing practices and lessons learnt (water supply and solid waste management) from Phase III in existing and new Oblasts. The ongoing reform process at national level on strengthening local self governance will be further supported. All interventions on disseminating and institutionalising the developed approaches and mechanisms of decentralised services provision will be in cooperation with Minregion, Parlamentary Committee on State-Building and local self governance, and Association of Villages and of Cities.

Citizens of Ukraine benefit from improved local governance and better access to, and quality of public services resulting from the advanced decentralization reform.

National stakeholders improved their capacities to regulate, guide and implement the decentralization reform through (outputs):

Results and lessons learned at the local and regional levels are well documented with DESPRO’s support in order to be used for knowledge management purposes and to make them available for public servants, and to feed them into further policy development at the national level. 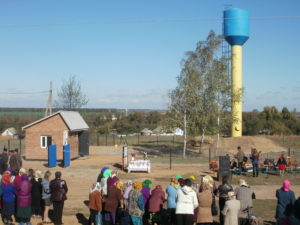