You are here: Home / Our Projects / Study Tour of Water Companies from Eastern Kosovo

Skat Consulting Ltd. was invited to organise a study tour in Switzerland for two regional water companies from Kosovo. 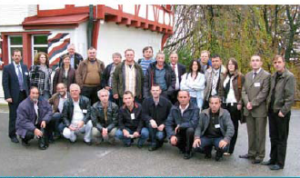 Two regional water companies (RWCs) in South Eastern Kosovo, Hidromorava in Gjilan and Bifurkacioni in Ferizaj, have received Swiss support since 1999. They provide basic service and cover their essential operational expenses with the revenue generated from water charges. SDC  commissioned Perreten & Millerette SA to provide additional support to the two RWCs in the form of coaching of their senior management from November 2007 to October 2009.

In the framework of this coaching project, a study tour in Switzerland was planned to enable managers and key staff of the two RWCs to exchange knowledge with Swiss water utilities companies. Skat was invited to organise a five-day study tour during October 2008.  The study tour included a visit to the water works of St. Gallen, the Intercommunal Water Supply Association of the city of Wittenbach and the Technical Service in Weinfelden, a publicly owned private enterprise. The study tour concluded with an exchange workshop, where participants were able to reflect on lessons learned.

Development of a National Operation and Maintenance Framework for the Malawi...
Scroll to top